When it comes to finding the most suitable delivery method for any given supplemental ingredient, even some of the biggest health buffs can get intimidated.

Thankfully, when it comes to glutathione supplementation, liposomes are steadily becoming the easy choice.

In recent years, the supplement market has become filled to the brim with alternative delivery methods that are leaving traditional capsules and tablets in the dust.

Powdered and liquid supplements have become commonplace forms of glutathione. Other more exotic forms, such as patches and suppositories, are steadily gaining in popularity as well. While these may yield some benefits for absorption and retention in certain individuals, one form has become increasingly renowned for its all-around bioavailability and convenience: liposomal glutathione.

Some of you must now be wondering “what is liposomal glutathione?”

In a nutshell, liposomes are a type of spherical fat, or lipid bi-layer, which can encapsulate ingredients like glutathione (GSH) to help deliver them to the bloodstream more efficiently. However, to truly understand the benefits of liposomal glutathione, lets first discuss the oral bioavailability of glutathione.

Can the Body Process Glutathione Orally? 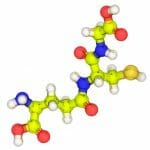 The short answer is yes, but the better question is just how efficiently the body can achieve this process. Of particular interest is how GSH fares in comparison to other common ingredients, and what unique challenges it might pose to the body in terms of absorption and utilization.

Thankfully there is a decent body of research on this topic. This is primarily due to the importance of glutathione for facilitating antioxidant activity throughout the body, in conjunction with the fact that GSH plasma concentrations tend to be low in individuals with certain severe health conditions.

As far back as the early 1990s, researchers have been inquiring as to the availability of orally administered dietary glutathione.

The results of a particular ’92 study conducted at the University of Bern in Switzerland indicate that digestive processes will render a single 3 g dose of glutathione almost entirely useless within a 270-minute period following administration. The study indicates that plasma GSH levels of its participants did increase, but only to a negligible degree. (1)

While the study in question was run with a limited pool of participants (7 healthy volunteers), its results have been echoed and validated in other reviews and studies which are being published to this day. (2,3)

Therefore, oral glutathione may provide a marginal increase to circulating GSH levels in some healthy individuals. However, the change is so minor and inefficient that most people consider it null-and-void in terms of its impact on human health.

This diagram depicts exactly how liposomes are able to encapsulate and protect nutrients.

One of the primary reasons for the low oral bioavailability of glutathione is its fragility in standing up to standard digestive processes. The molecules are simply too weak in isolation to withstand the heavy exposure to digestive peptidases (enzymes) and hydrolysis (a reaction where water breaks chemical bonds) which inevitably occurs in the very earliest stages of digestive tract. (1,4)

But what if you could reinforce these molecules?

You can think of liposomes similarly to a coat of weather protective paint around your house. It’s not going to save your home from an earthquake, but it certainly will keep things dry during rainstorms.

Similarly, nutrients which are encased in liposomes are not guaranteed a magic carpet ride to your bloodstream, but they will certainly be more resistant to stomach acid and other sources of degradation.

The end result? More molecules may survive the initial stages of digestion and become more readily available for proper absorption into the bloodstream. (5)

In addition, there are no known added side effects to taking glutathione liposomally. Some of the known glutathione side effects include cramping, bloating, and some difficulties with breathing, particularly in those who struggle with asthma. (6) Some of these side effects may still occur with liposomal glutathione, but it’s unlikely that they will be exacerbated in any way. (5)

First and foremost, you should always look for products which contain reduced glutathione, sometimes known as L-glutathione. This form is widely considered to be the most active and bioavailable on the market. The next factor to consider is the quality of the liposomes themselves. Most liposomes are derived from phospholipids like raw lecithin. While this ingredient is decent enough, it does leave a lot of room for improvement.

Quicksilver Scientific has long been at the forefront of liposomal supplementation. Their signature Quicksilver Delivery Systems® make use of high-phosphatidylcholine phospholipid mixes. The reason for this is to create smaller, more stable liposomes. As such, Quicksilver liposomes may even begin absorbing sublingually the minute they hit your mouth. (7)

For all of these reasons, Quicksilver Scientific Liposomal Glutathione is our first recommendation for GSH supplementation.

While some of the above explanation got pretty technical, the concept of liposomal glutathione is surprisingly simplistic: Encapsulate glutathione molecules in layers of fat which protect them from digestive processes and assist their absorption into the bloodstream. Easy as pie, right? 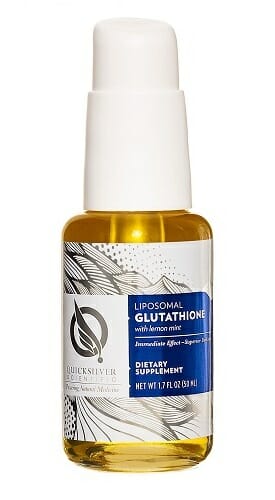 Thank you for taking the time to read Liposomal Glutathione Explained: Benefits, Side Effects & More

Wait, Before you go!

We’d love to send you some additional, relevant information. If you don’t like it, there’s an unsbuscribe link at the bottom of every email we send.

We respect your privacy and take protecting it very seriously. No spam!