Stop & prevent unwanted grey hair – Gray Hair Rescind with Catalase brings back your natural hair color. Change the gray hair that you already have at the root, & promote thicker, healthier hair to look years younger & reverse the signs of aging. If you’re not completely satisfied within 60 days, we’ll give you your money back!

Used by both men and women of all ages for gray hair treatment, Gray Hair Rescind with Catalase is specially formulated to stop unwanted gray hair from growing and the first product of its type to offer Catalase along with traditional herbs, vitamins and minerals thought to be beneficial in promoting natural hair color and health. According to recent scientific studies, low levels of Catalase in your body can turn your hair gray. Hydrogen peroxide cannot be broken down. This causes the hydrogen peroxide to bleach the hair from the inside out, making it gray.

Gray Hair Rescind combines Catalase with other nutrients to stop gray hair from growing and to promote thicker, healthier hair. It also contains saw palmetto to help restrict the production of certain enzymes. Many anti-aging doctors much prefer this method of gray hair treatment as opposed to the harmful chemicals in dyes and hair colors for effective, safe and lasting results. 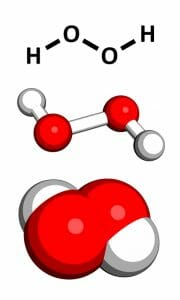 A Closer Look at Catalase

While Catalase is a surprisingly rare ingredient to find in dietary supplements, it is extremely common in living organisms. In fact, every living organism which is exposed to oxygen contains some amount of Catalase. So, what exactly does this enzyme do in the human body?

Understanding Hydrogen Peroxide is key to understanding the role that Catalase plays in human health. Most people are familiar with its use as a mild antiseptic, typically applied to cuts and scrapes. However, Hydrogen Peroxide is also a harmful byproduct of countless metabolic processes within the body. When this toxic chemical is released, it must be converted into less harmful substances before it is able to damage cells and tissues. This is where Catalase comes in.

Catalase is one of the most important compounds for converting hydrogen peroxide into relatively harmless gaseous oxygen and water molecules.1

So, how does all of this information relate to gray hair? It’s actually quite simple: medical experts have firmly established a correlation between the graying of hair and an increased accumulation of hydrogen peroxide in hair follicles.2,3 As such, it’s not surprising that a 2014 study revealed that intrinsic deficiencies in Catalase may contribute to an overabundance of hydrogen peroxide in gray hair follicles.4

Therefore, it logically follows that supplementation of Catalase may contribute to a reduction of Hydrogen Peroxide in hair follicles, and elsewhere throughout the body!

These statements have not been evaluated by the Food and Drug Administration. This Product is not intended to diagnose, treat, cure or prevent any disease.