TRU NIAGEN is a supplement unlike any other. This is largely due to the presence of NIAGEN – a patented ingredient which may be converted to NAD in the cells of the body. NAD is a coenzyme which is essential to energy product and transfer. Declines in NAD levels are closely associated with old age. 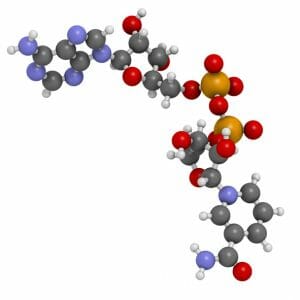 Understanding the Importance of NAD

All living cells contain some trace of nicotinamide adenine dinucleotide (NAD, also known as NADH or NAD+ in its oxidized form). That might begin to explain why NAD has become such a hot topic in the nutritional world. But what does this substance actually do for human health and well-being? The better question might be: what doesn’t it do?

NAD is classified as a coenzyme. This means that it assists in the process of certain enzymatic reactions within cells. One particularly notable byproduct of these enzymatic reactions is the conversion of nutrients from foods into usable energy sources for cells. That’s just one of multiple reasons why NAD is considered to be such a crucial player in cellular metabolism.1

To boil it down: without NAD, the body wouldn’t have the energy to execute its most essential physiological processes. That’s why TRU NIAGEN has been expertly crafted to bring you the very best nutritional options for bolstering healthy NAD levels.

Given that declines in cellular metabolism and mitochondrial function are a key identifying trait of the aging process, it is understandable that NAD supplementation has become so desirable to so many people in the health and wellness community. However, NAD cannot be taken on its own. Instead, NAD supplements rely on a nutrient precursor which can be ingested then converted to NAD in cells throughout the body.

The most popular ingredient for use as a NAD precursor is undoubtedly NIAGEN. This patented ingredient, also known as nicotinamide riboside (NR), is a unique form of vitamin B3 which is widely considered to be the most effective and well tolerated precursor on the market.

TRU NIAGEN is the purest and most direct source of NIAGEN available on the market. That’s because TRU NIAGEN is distributed by ChromaDex – the sole patent holder of NIAGEN. While there is still much to be studied on the effects of TRU NIAGEN and other NR supplements, they have shown great promise, particularly in the areas of arterial stiffness and healthy blood pressure.2

NIAGEN® and TRU NIAGEN® are trademarks of ChromaDex, Inc.