Empirical Labs Liposomal CoQ10 is an antioxidant powerhouse unlike any other. It’s all thanks to quality ingredients, proper dosages, and advanced liposomal delivery. No other supplement on the market features a potent 200 mg dose of CoQ10 in its most bioactive form of ubiquinone, and liposomal encapsulation, all in one formulation!

Why Supplement for CoQ10?

As with other vitally important antioxidant compounds like glutathione (GSH) or N-acetyl-cysteine (NAC), Coenzyme Q10 (CoQ10) is produced organically within the human body. Its highest concentrations are traditionally found in the heart, liver, kidneys, and pancreas.1

Despite its inherent presence in the human body, CoQ10 is still one of the most popular supplemental ingredients in the world. So why is this? What do people have to gain from the consumption of supplemental CoQ10 if the body already has its own built-in supply? The reasons are fairly simple: either to curb the possibility of a CoQ10 deficiency, to bolster general antioxidant support within the body, or sometimes for anti-aging support.

While numerous scientific studies have unveiled benefits for multiple bodily systems and functions stemming from the antioxidant properties of CoQ10,2,3 there is still a great deal of controversy surrounding the bioavailability of CoQ10 supplements. 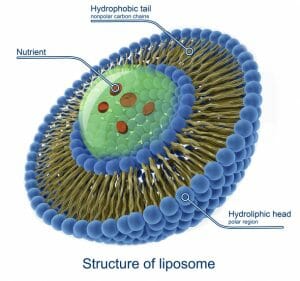 Diagram depicting the layers of protection offered to nutrients via liposomal encapsulation.

Sadly, many commercial CoQ10 supplements are known for their poor intestinal absorption. The reasons for this are many, but thankfully most of them can be circumvented with careful attention paid to quality ingredients, dosages, and delivery methods.

Generally, ubiquinone and ubiquinol are considered to be the two most superior forms of CoQ10 in terms of bioavailability.4 However, the quest for enhanced CoQ10 absorption doesn’t end there. As with many other fragile antioxidant compounds, the bioavailability of CoQ10 seems to be greatly enhanced by the presence of lipids,5 also known as liposomes.

Liposomes are spherical, multilayered fat molecules which can bind with nutrients via a colloidal dispersion or emulsification. Thanks to the added layers of fatty liposomes, these nutrients are better protected from digestive processes which might degrade their potency, and delivered safely to parts of the body where they can be fully absorbed and utilized. All in all, when it comes to CoQ10 supplement bioavailability, liposomal delivery can’t be beaten.

That’s why Empirical Labs Liposomal CoQ10 has such a strong reputation in the supplement market: not only does it feature their patented QualiSome™ Technology for advanced liposomal delivery, it also uses a potent 200 mg dose of ubiquinone. No other liposomal CoQ10 supplement can match the power and bioavailability of this formulation.