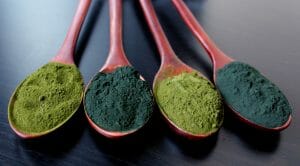 Spirulina and chlorella have earned their place among the most popular supplement ingredients in the world. However, it can often be tricky to sort the differences between these two algae species.

They, as with most algae, share a particularly high micronutrient density. While this is the very essence of what makes these foods so valuable for supplementation, it may also pose a health risk to take them both at the same time, primarily due to their shared iron content.

This article is here to help you gain a better understanding of blue spirulina vs. chlorella so that you can choose which of these superfoods is best for your unique dietary needs. 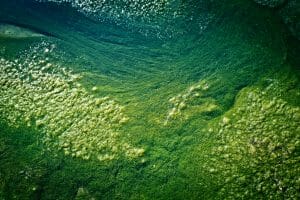 Most people aren’t thinking about nutrition when they look at “pond scum” algae formations like this, but maybe they should…

Algae: they may not be the most appetizing examples of seafood, but no one can deny the nutritional value of these amazing aquatic organisms. So, what exactly is algae?

Algae is defined as any member of a group of aquatic photosynthetic organisms. While it would be convenient to describe algae as an aquatic plant or fungus, it is actually neither of these things. Rather, algae is its own unique classification which includes everything from single-celled organisms and cyanobacteria to plant-like species. In fact, species of algae range from microscopic micromona to kelps which can reach 60 meters in length!

All in all, the most important defining feature which ties all of these aquatic creatures together is their ability to draw energy from sunlight (photosynthesize). Only a small and anomalous group of “colorless” algae are lacking in chloroplasts and photosynthesis, and instead get their energy from the oxidization of organic molecules.1 Frankly, it seems these strange species were only classified as algae for lack of any other appropriate term! 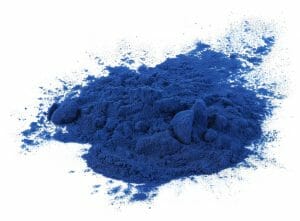 Blue spirulina is a particular species of cyanobacteria (blue-green algae) which is known by the scientific name of Arthrospira platensis. While all forms of cyanobacteria carry a blue-green hue, Arthrospira platensis is easily the most notorious for this trait. This is due to its high phycocyanin content. Phycocyanin is a a naturally occurring blue pigment which is useful primarily for its exceptional antioxidant properties.

According to a 2016 study the effects of phycocyanin include antioxidant activity, neuroprotectivity, and various forms of cardiovascular support. As it were, cardiovascular support is the most widely known and analyzed trait of Phycocyanin and includes protection from oxidative stress, mitochondrial damage, and support for healthy cholesterol levels already within normal range.2

In terms of how its nutritional content differs from chlorella, spirulina is most notable for its higher protein content, as well as its low levels of iron. This indicates that it can be used more freely than chlorella which contains enough iron to trigger gastrointestinal complications and other health risks if overused. That said, spirulina still contains high levels of copper and other trace minerals which could be harmful if taken in excess, so it’s still best to be cautious with your spirulina consumption.3

In addition to its nutritional benefits, the vibrantly blue phycocyanin content also makes for a useful, all-natural food coloring agent.

Chlorella is often sold in dense, green tablets like these.

Chlorella is a much more plant-like form of algae than spirulina. It is rich in green photosynthetic pigments known as chlorophyll-a and -b.

While it is lacking in protein when compared to spirulina, it is a much richer source of omega-3 fatty acids and calories. It would be difficult to achieve your daily dietary omega-3 intake needs with chlorella alone but given how many people avoid seafood entirely in their diets, this additional boost of omega-3 content may be invaluable to certain individuals.

As far as the micronutrients are concerned, Chlorella distinguishes itself from spirulina via particularly high vitamin A, magnesium, zinc, and iron content.4 While the extraordinarily high iron concentrations can be useful to certain diets, for others this concentration may be a source of gastrointestinal disturbances and more severe health complications.

It’s also worth noting that, due to the immune support properties of zinc and vitamin A, chlorella may be the better of the two options in terms of a healthy immune response.

There is a lot to be said for the nutritional importance of foods which come from the sea. While they may not be everyone’s favorite foods to eat, substances like algae are some of the most nutrient dense natural food products on Earth!

When it comes to selecting between the two kingpins of supplemental algae, blue spirulina and chlorella, it is important to pay attention to the finer details of their exact nutritional contents. Let’s review some of the key details:

It’s also worth highlighting that, as with any product of nature, there is a great deal of variance in quality and composition in each and every batch of spirulina and chlorella. That’s why it’s even more important than usual to be very careful when selecting these products.

When it comes to spirulina, we couldn’t recommend any brand or product higher than E3Live and their amazing Blue Majik spirulina powder. This certified organic 100% Phococyanin extract is harvested from the clean, clear waters of Klamath Lake. Their extraction method relies on no chemicals, and the formula is free of excipients and other artificial ingredients.

Click here to try it for yourself. Newbies and regular spirulina-takers alike are sure to agree that this product is simply unbeatable! 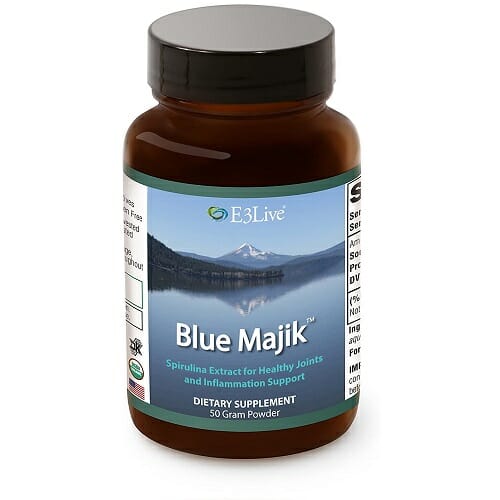 Thank you for taking the time to read Blue Spirulina vs. Chlorella: Weighing the Nutritional Benefits

Wait, Before you go!

We’d love to send you some additional, relevant information. If you don’t like it, there’s an unsbuscribe link at the bottom of every email we send.

We respect your privacy and take protecting it very seriously. No spam!