What is Bell’s palsy?

Bell’s palsy is a mysterious condition that affects about 40,000 Americans each year. In Bell’s palsy, one half of the face abruptly becomes temporarily paralyzed. This paralysis usually begins suddenly and reaches peak paralysis within 48 hours. 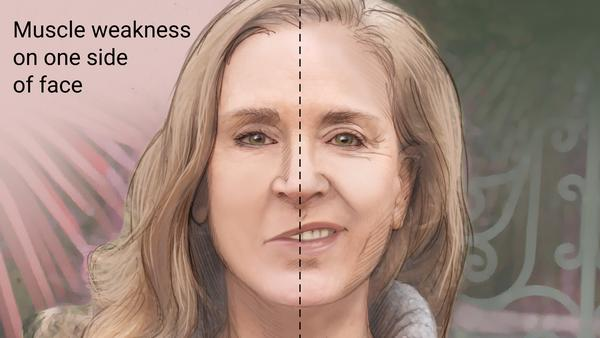 People with Bell’s palsy might experience a number of uncomfortable symptoms, including total paralysis or pronounced weakness on one side of the face. The weak side typically becomes flat and expressionless and affected people might feel a heaviness or numbness in their faces, even though normal sensation remains. Other symptoms include a drooping appearance on the affected side of the face and impairment of tear and saliva functions.

If the upper part of the face is involved, affected people may have problems with their eyes. Due to the paralysis, affected people are often unable to close their eyes and dryness is a problem. In extreme cases, this dryness can result in eye damage or even blindness. To help avoid these problems, some physicians recommend the use of paper tape at night to keep the affected eye closed and lubricated. In addition, people with Bell’s palsy may experience loss of taste or abnormally enhanced hearing because the muscle that stretches the eardrum is paralyzed.

Most people with Bell’s palsy (about 80%) recover within weeks or months. Among those who don’t recover fully, the face may continue to be weak on the affected side and droop. About one person in 60 will experience Bell’s palsy at some point in their lifetimes. It can occur at all ages, but is most common between the ages of 15 and 60 (NINDS, Apr 2003)

Doctors believe that the paralysis is caused by damage to the seventh cranial nerve, known as the “facial nerve”. This nerve goes through a narrow passage within the skull. When the nerve swells, it pushes up against the skull, and prevents it from working normally (Webmd, Oct 2016). The condition is associated with presence of the herpes simplex virus 1 (HSV 1), which suggests that reactivation of this virus in the facial nerve might be responsible for the condition. Varicella herpes zoster has also been implicated. 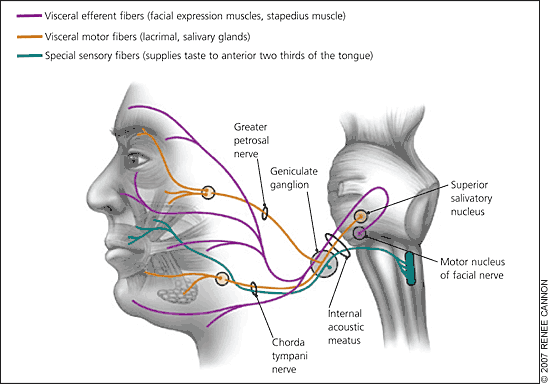 According to the herpes theory, about 80% of Bell’s palsy cases are caused by reactivation of HSV 1 or varicella zoster (a member of the herpes family). HSV1 is most commonly associated with oral lesions, as opposed to HSV2, which is most commonly associated with genital lesions. Varicella zoster is responsible for chickenpox in children and shingles in adults. The herpes virus can be transported to the facial nerve, where it may remain dormant until it activates and causes Bell’s palsy (Lambert T 2004). Although this theory has yet to be proven absolutely, supporting evidence is strong enough that Bell’s palsy is often treated with antiviral drugs (acyclovir, famciclovir, and valacyclovir) used to kill the herpes virus. To date, although viral DNA has been found in the facial nerves of patients with Bell’s palsy, no studies have actually found actively replicating herpes viruses (Linder T et al 2005).

No single test can diagnose Bell’s palsy. Doctors will ask you to move various facial muscles, such as frowning, closing your eyes, and lifting your eyebrows. Often times, in order to diagnosis Bell’s palsy, Doctors will first rule out other possible causes for facial paralysis, such as strokes, infections, Lyme Disease, and tumors (Mayo Clinic, Dec 2014).

Below are a variety of diseases that mimic Bell’s palsy paralysis. These diseases often need to be ruled out before reaching an official Bell’s palsy diagnosis.

Besides antiviral drugs, the standard treatment for Bell’s palsy is corticosteroids such as prednisone. These drugs have been shown to reduce inflammation of the facial nerve, which minimizes compression and damage (Adour KK et al 1996), although a few studies have found that steroids are ineffective (Salinas RA et al 2004). Some studies have also suggested that antivirals are effective only if prescribed early in the disease course (Lejeune D et al 2002).

In severe cases, surgical treatment might be recommend, although this course of treatment is associated with a high risk of hearing loss, and many clinicians recommend against it. The surgery used to treat Bell’s palsy is known as decompression surgery. It is used to relieve pressure on the affected facial nerve.

A number of alternative or complementary therapies have been studied for Bell’s palsy. Many people believe that facial massage will help relieve the condition, although there is evidence that facial massage will not help (Kasper DL et al 2005). Acupuncture combined with exercise therapy has been shown to increase therapeutic effect, with a cure rate of 66.7 percent among people on combined therapy compared with a cure rate of 46.7 percent in a control group (Qu Y 2005).

Other supplements have attracted attention in Bell’s palsy but have not been subjected to rigorous scientific testing. Some people with Bell’s palsy report symptom relief from omega-3 fish oils, which are naturally anti-inflammatory and may work by relieving the nerve inflammation (Bells Palsy Association 2004).